This exhibition focuses on the work of nine women artists who primarily work in film, video and performance. They are all present in the work immersed in a solo reverie, acting out tasks and actions that range from the very bodily and visceral to the banal and distant.
There is a connectivity between the works on display together due to the earnest endeavours and intimate obsessions of the artists and their shared engrossment in the materials they wield, whittle or balance.

‘If we think against the grain of the solo as discrete, we can begin to hear solo in collectivity – and not just by tracing influence in uni-directional lines of influence, but lines of influence or reverberation ….as involved in call and response, or read as imbricated in collective or choral actions, “solo” in some senses casts itself into the future as ‘becoming ensemble’…citing other work, co-opting other work, creating an action by acting or reacting, enacting or re-enacting, making of the single body a stage across which whole histories (the multitudes) are brought to bear’.

Posted by Louise Colbourne at 03:33 No comments: 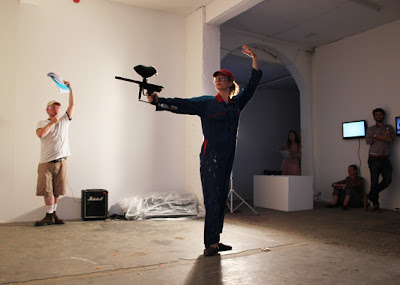 Kate Hawkin's performance The Bollocks caused a stir on the opening night of the SOLO exhibition on the 7th of September in St Leonards on sea. The act of displaying different gun firing stances, taking aim and shooting at an expanse of canvas with a paint ball gun was executed with great finesse and theatricality.

More news and images to follow soon...
Posted by Louise Colbourne at 23:15 No comments: 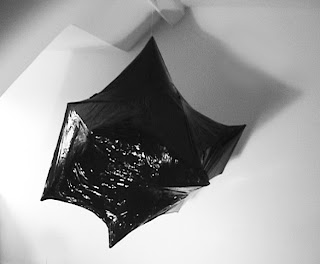 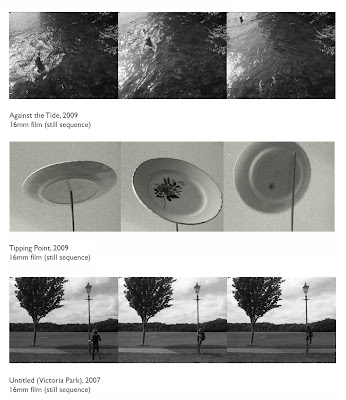 Pictured is a still from the 16mm film ‘Against the Tide’, I attempt to swim against a current that is too strong and I am repeatedly washed from the frame.
Also pictured is a still from the 16mm film ‘Tipping Point’.  A china plate spins precariously on a stick and as it falls, the film cuts. The action repeats, the plate spins, falling from the frame repeatedly.
I use what could be defined as Sisyphean rules and tasks, performing them for the camera or suggesting them within how the work is exhibited. These actions can seem like a romantic response to, or an urge to escape from the space in which they are performed.
Posted by Louise Colbourne at 02:41 7 comments: 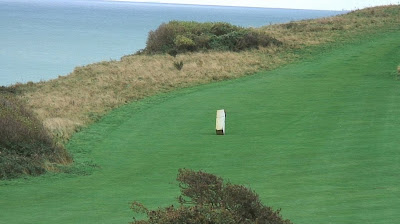 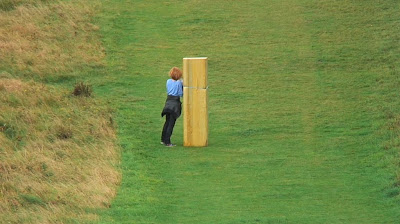 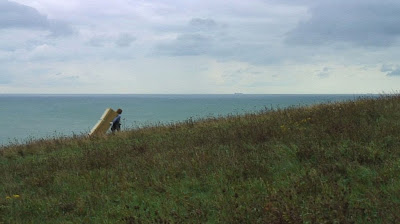 Bettina Buck (born 1974, Cologne) studied at the Academy of Media Arts, Cologne before completing an MA in Fine Art at Goldsmiths College, London. She was recently selected as one of twenty-five young artists for Art Cologne’s New Positions. Recently she has exhibited in Proposal (Nacht und Träume) for Stavanger, curated by Vincent Honoré, and with Sara Barker in Bettina Buck invites… at Mirko Mayer Gallery, Cologne.

"A figure stumbles across a tufted cliff-top field. She is abandoned in her Sisyphean task of dragging a dense bluish foam monolith, half-bleached yellow by the sun and storeroom-neglect, across a grassy terrain. The video is looped, her task endless. Her travails might be read as allegorical, for they appear otherwise without purpose: the foam is being taken nowhere, and its ungainliness appears designed specifically to impede the protagonist (performed by Bettina Buck herself) from making headway. This is the lot of the artist: the physical labour; the perverse logic of forcing mute objects into relational forms; the unwieldiness of interpretation…

…Like an homage to the wobbly inconsistency of home-movies, Interlude welcomes visual erratum. The horizon bounces up and down with the extreme zoom and lack of steady-cam technology; the air is electric with a tinnitus whistling that denotes audio-overload in the camera’s microphone. In fact, these elements are all quite deliberate. The sound levels have been post-processed to a steady cyclonic buzz, and that quivering zoom is carefully utilized to capture moments of gentle absurdity (in one scene, a kindly stranger carries her load, a dog running alongside them bucolically). Also, it recalls the edginess of her location on a cliff-edge and the imperative of gravity (the sky here plummets straight to the sea and her sculptural burden slumps  towards horizontality)...

... Buck’s works forever threaten to fall over in front of us, on us, or after we have left the gallery. The challenge is to feel relaxed about the mutability of such objects. After all, should the edifice collapse, we could simply learn to appreciate it anew – sit on its newly horizontal bulk or pick it up and trudge onwards, like the protagonist in Interlude."

Extract from Interlude by Colin Perry
Posted by Louise Colbourne at 03:25 No comments: 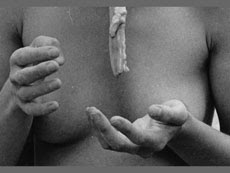 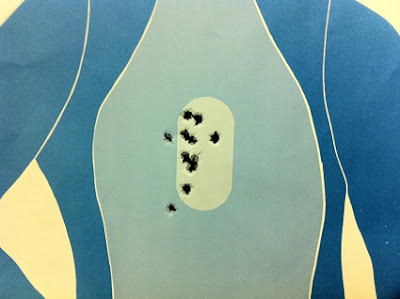 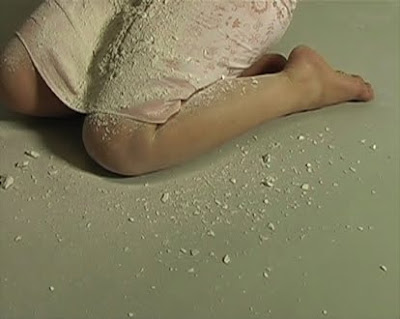 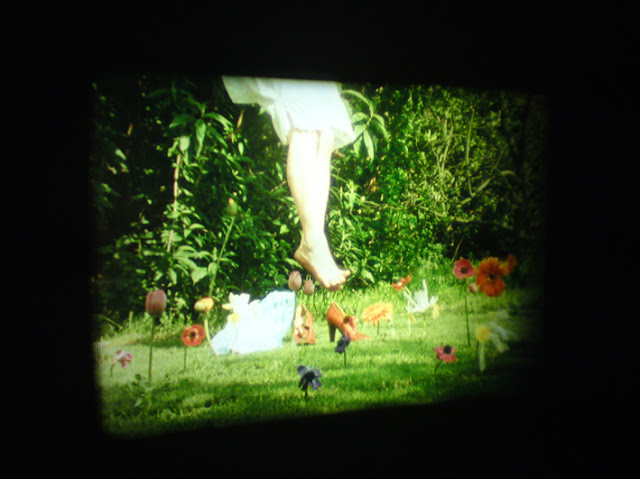 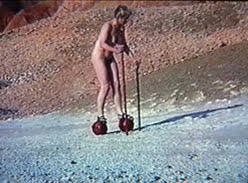 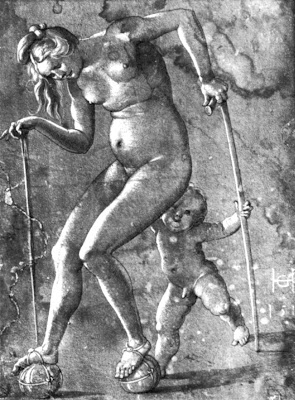 “Meeting Nude Woman Walking on Balls (after Hans Baldung Grien) 1514”
I am wanting to express to you a range of thoughts and ideas I have had in relation to both the work here by Hans Baldung Grien,  ‘Nude Woman Walking on Balls’ from 1514 and my own performed response, ‘Meeting Nude Woman Walking on Balls’ ( video still above).
I have been fascinated by this image (gesture at image of Grien’s) for some twenty years. It seems to tell so many stories. What I first reacted to and what still haunts me remains the arcane strangeness of a naked woman pictured walking with balls strapped to her feet. It is a mystery – why did the artist, Hans Baldung Grien in 1514 draw a woman this way. What was he trying to say?
My idea of performing the act was to become the woman, in order to understand both the meanings of the image better and to somehow ‘meet’ with it’s central character.
an extract from: Performance Lecture text for Body Parts RSA, Edinburgh 19 Feb 2006

Bronwyn Platten, born in Adelaide, South Australia, is an artist, researcher and curator based in Manchester, United Kingdom.
Bronwyn's work explores embodiment, gender, sexuality and identity and utilises a range of media including sculpture, performance, film and installation. She has exhibited her own work internationally as well as developing creative arts projects with individuals and groups from diverse communities.
Posted by Louise Colbourne at 11:23 1 comment: